Building a Movement for Women in Politics

Building a Movement for Women in Politics

One of the things that I’m most passionate about is helping more women become elected officials. That passion is why I’m on the Advisory Board of the LBJ Women’s Campaign School at the University of Texas at Austin. And it’s why I want to share with you the story of Amy Kroll, the founder and executive director of the Campaign School.

Amy is a quintessential #Firestarter. She saw a need, and she built a movement to address that need — even in the face of an obstacle that upended all of our lives. Right now, you have an incredible opportunity to be part of that movement. If you’ve ever wanted to run for office or manage a political campaign, applications for the Campaign School are now open, but you need to move fast. Since time is of the essence, let me go ahead and introduce you to Amy and tell you more about what makes the LBJ Women’s Campaign School unique. 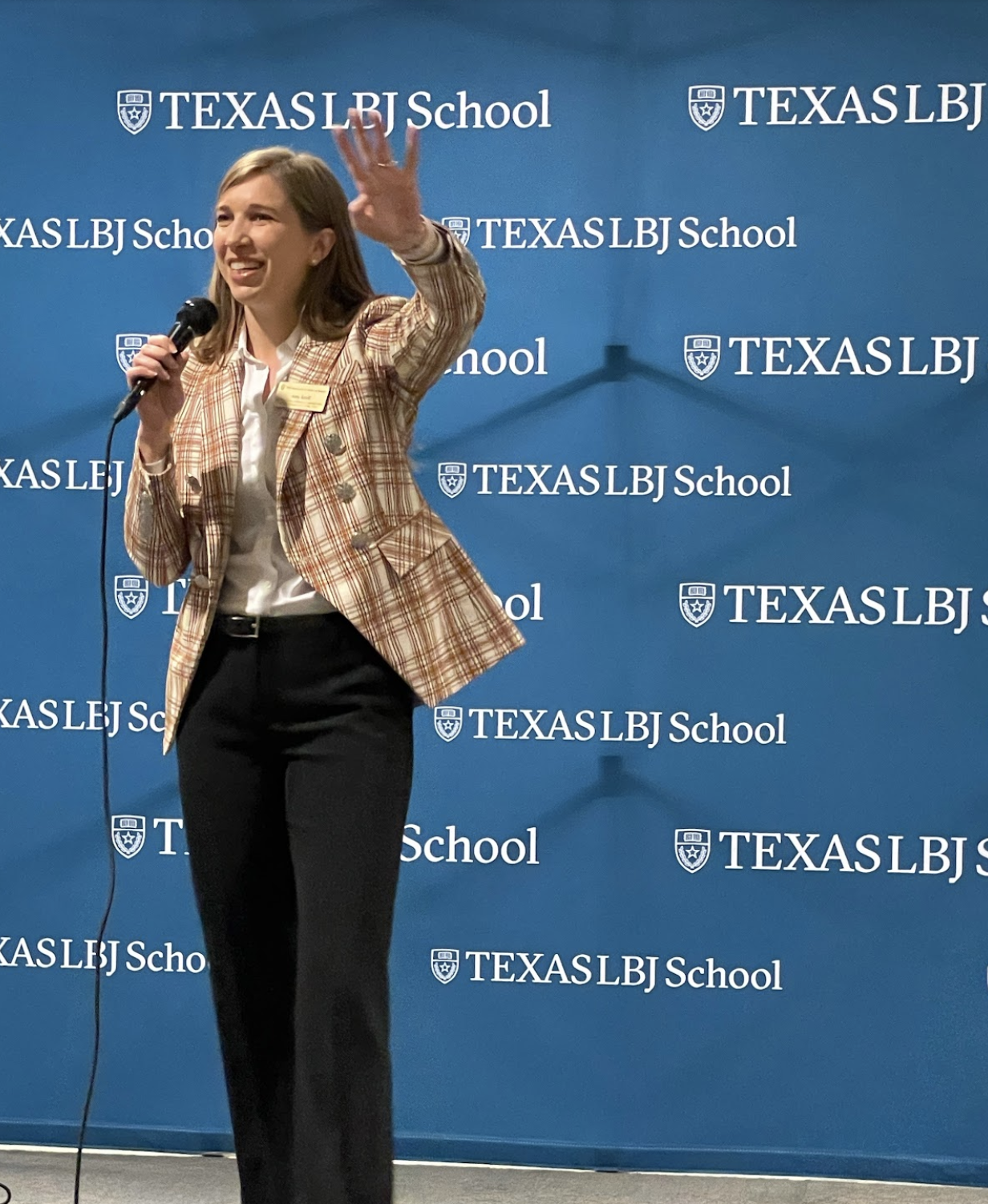 ‘I Just Had This Big Dream’

Before she got the idea for the Campaign School, Amy was already a political veteran. After completing her bachelor’s degree in international relations and affairs at Stanford, she moved to Missouri to work on then-Sen. Claire McCaskill’s campaign. That sparked her interest in getting more women elected to office.

“So from there, I knew that I wanted to keep working in politics,” Amy says. “And I actually moved to Washington, D.C., with just two suitcases, a one-way ticket, nowhere to stay except for one week, no job. I just had this big dream that I wanted to work in politics.”

Life has a way of supporting those big dreams. Amy got a job in the press office for Sen. Chuck Schumer and subsequently worked with the National Democratic Institute and Democratic National Committee. Living in D.C. changed her life in another way as well. She met and married Air Force Capt. Louis Lachman.

When he got stationed in Texas, the couple moved here. Amy continued her political involvement in the Lone Star State. She realized that she wanted to work on policy and decided to go to grad school. So she started working on her master’s degree at UT-Austin’s Lyndon B. Johnson School of Public Affairs in 2018. 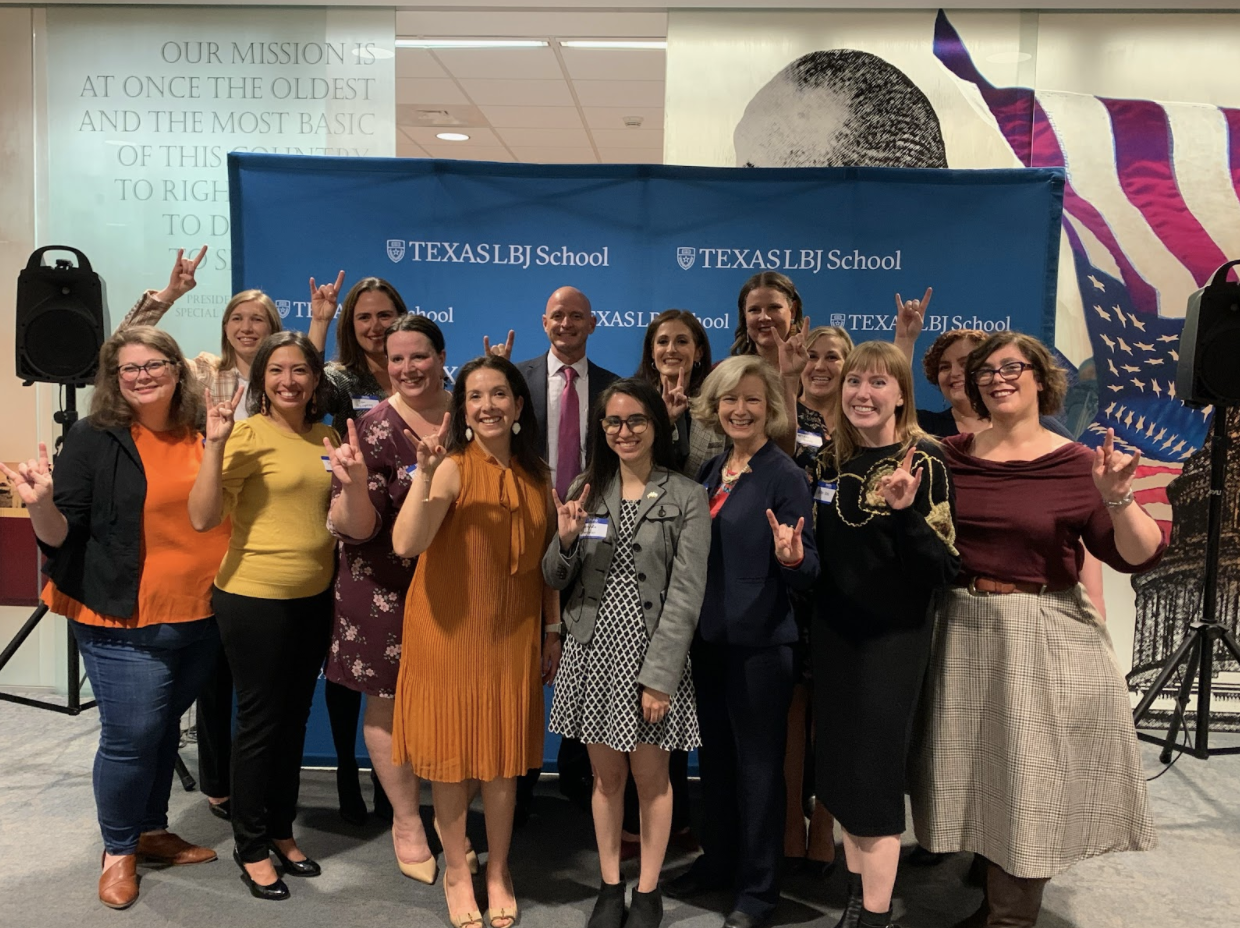 As I know you remember, around this time there was powerful momentum building around women in politics.

When Hillary Clinton spoke at the LBJ School in 2018, Amy was in the audience. And she had a realization.

“I was watching her and I was thinking, ‘We have to be doing more to support women in politics,’” Amy says. “I was thinking about all of the barriers that women face, and it got my wheels turning. I started thinking, ‘What if we trained women to run for office at the LBJ School?’”

From there, Amy began working to turn this moment of inspiration into a movement. She pitched her idea to professors, donors and, ultimately, the dean of the LBJ School. And she got the green light to start creating the Campaign School.

A Program Where Everyone is Welcomed

From its inception, Amy made sure the Campaign School had a few essential qualities. First, it’s bipartisan — from students to board members to guest speakers. While there are other programs out there that help train and support women candidates, many focus on only one end or the other of the political spectrum.

At the LBJ School, though, “We want to be training women across the aisle together in one place — have them get to know each other right from the get-go, right when they’re getting started in their public service journey,” Amy says. “That was really critical to me that we were able to create a bipartisan program and that everyone would feel welcomed and like they were a part of the community when they joined our program.”

Participants in the program are diverse in every sense of the word. They’ve ranged in age from their 20s to their 60s, and 60% have been women of color. They’ve hailed from 13 states, from Texas to Alaska, and come from rural and urban areas. They’re diverse in religion, income and immigration status.

The LBJ Women’s Campaign School is also distinguished by its mentorship program. “We recruited 85 mentors, and over a half of them are elected officials or former elected officials,” Amy says. Mentors meet “one on one with the women in our program and help give them that tailored support that they need to be able to take the next step in their career.”

‘We Cannot Put This Program on Pause’

While Amy found lots of support for the movement she was building with the Campaign School, there were also obstacles along the way. Some doubted that the program could truly be bipartisan. Others questioned whether this specialized training for women was even needed. But Amy didn’t let skepticism stop her. In fact, she used it to make the program stronger. “Making sure that we were addressing concerns from the outset is what helped to propel us forward and propel us past some of those obstacles,” she says.

But that wasn’t the biggest challenge Amy and the Campaign School faced. Back before all of our lives changed in March 2020, the plan was to launch the program in person that June. But then came Covid-19. Amy closely watched what other programs were doing. She consulted with the school’s different stakeholders. Would they have to cancel their plans before the Campaign School even got started?

“Ultimately, we decided elections are going to continue to happen,” Amy says. “Those are not going to be canceled, so we need to continue to train women. We cannot put this program on pause.”

So the Campaign School moved forward — and moved online. And, as the pandemic continued, the second cohort was online as well. The next cohort will have both in-person and online components.

“What we learned from Cohorts 1 and 2 is that there are actually huge advantages to online programming,” Amy says. Notable speakers who might not have had time to travel to Austin were able to join the participants via Zoom. The hybrid approach also supports the program’s goals of “knocking down socioeconomic barriers for women in politics,” Amy says. It cuts travel costs, helps the program keep tuition low and reduces the amount of time participants have to be away from their jobs and families.

In just a few years, the Campaign School has gone from being a flash of inspiration in Amy’s mind to a genuine political force. The first cohort graduated in January 2021 and the second in November 2021. “And, already, 11 women are running for office, which is huge,” Amy says.

Additionally, program participants are becoming campaign managers and legislative directors. “So I’m very proud of all of the many different ways that these women are impacting policy and making a change in their community,” Amy says.

And she’s excited about what the future holds. “One of the ways that I’m looking to expand the program is thinking through programming for our alumni, “Amy says. “Because now we already have 120 program alumni, and that’s only going to continue to grow into the future. And this is a powerful sisterhood of women in politics who can support one another in the political arena.”

What Amy’s Story Teaches Us

Amy gained a lot of wisdom through building this moment. When I asked her what advice she would give to you as a fellow #Firestarter, she started by talking about the power of passion. “It’s amazing what you can accomplish when you’re focused on passion,” she says. She learned this truth from a professor who told Amy and her other students to spend 20% of their class time focused on a passion project. Prioritizing her passions was “huge for getting this off the ground,” she says.

She also wants you to trust your instincts and your decision-making skills. “You have to make a ton of decisions when you’re starting an organization,” Amy says. “I would love to go back in time and tell myself to trust my instincts, trust my decision-making because I had a lot of power inside of me and I know what I’m doing.”

Finally, Amy reminds us that you never have to go it alone when you’re building a movement. “Bring people in with you,” she says. “Communicate your vision.”

How to Apply for the LBJ Women’s Campaign School

If you want to bring your own vision to life by getting involved in politics, follow this link to apply for the next Campaign School cohort. Your application is due January 16, which is coming up fast, #Firestarters. To apply, you’ll need to answer a few questions, submit several essays and provide a letter of support from someone who can speak to why you would be an awesome candidate or campaign manager.

I know that somebody out there reading this right now is thinking something like this:

This program sounds amazing, and I’d love to be a political #MovementMaker. But getting involved in politics also seems a little scary, and I’m not sure I have what it takes to succeed.

If that’s you, Amy wants to remind you of a quote by Eleanor Roosevelt: “You must do the thing you think you cannot do.”

Focusing on something larger than yourself is another way to get past any anxiety about applying. What causes and issues are driving your interest in politics?

And being elected to public office is a lot more attainable than you might realize. “There are 500,000 elected offices in the United States,” Amy points out.

Other Ways to Support the Campaign School

If applying for the LBJ Women’s Campaign School isn’t for you right now, you can still be part of this movement to get more women running for office. Here’s how:

I hope you’ll consider joining me in being part of this movement. As Amy says, “There are so many different ways that we can get involved in our democracy and make change in our community. And 2022 is the year to do it.”

More Stories to Fire You Up

If you’d like to meet more #Firestarters who are helping empower women to run for office, pick up a copy of my book “Find Your Fire: Stories and Strategies to Inspire the Changemaker Inside You.” The new and expanded addition also features more stories like Amy’s about building movements even in the face of the Covid-19 pandemic.