Time to Break the Silence

With a master of medical science degree, Nichelle is a physician liaison in Charlotte, N.C. She’s been married to her husband, Harold, since 2013. She was also Mrs. North Carolina 2018. (That, as they say, is a whole other story — and one I’ll bring you soon.)

There was, however, one thing missing in this very full life: Nichelle and her husband wanted to be parents. But, like 1 in 8 other couples, they were having trouble conceiving.

Trying for a baby put the couple through a lot. Nichelle took medications, changed her diet and got acupuncture. They went through IVF cycles together — and through miscarriages. As if all that weren’t difficult enough, there was also pain caused by the lingering stigma around infertility, as well as by all the questions others asked about when they would start a family.

The Story That Couldn’t Wait

“I knew I would eventually share my story, but I thought it would be much later — after I had children and everything was just wrapped up neat with a bow,” Nichelle says.

Deciding to instead put herself out there while her struggle was still going on was big leap of faith. “I was scared to death,” she says. “I felt like I was running around naked.”

But taking the risk paid off.

“I heard a lot of support,” Nichelle says. Women commented or sent her private messages to share their own experiences and to thank her for “representing an underrepresented community. “

“So many people could identify with it,” Nichelle adds. “That helps me feel not as alone.”

Her days of suffering in silence were over. Nichelle soon found more ways to use her voice to change the conversation about infertility. 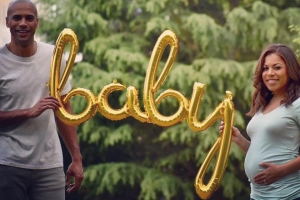 One Plus One Equals Three

Talk to Your Doctor Early

One of the best weapons we have against infertility is knowledge. So Nichelle began using the hashtag #StartAsking to encourage women to talk to their doctors about their fertility well before they’re ready to start trying for a baby.

If you’re a young woman and you think you might want to get pregnant someday, this is one of the most powerful things you can do for your future. As Nichelle explains, women usually don’t start talking to their doctors about fertility until after they have trouble getting pregnant. But if you assess your fertility earlier, you can make more informed decisions about when to start a family, make conception easier and head off future heartache.

A fertility assessment could reveal issues like endometriosis, polycystic ovarian syndrome (which Nichelle was diagnosed with) and uterine fibroids, all of which can make it harder to conceive, or a septate uterus, which increases the risk of miscarriage. All can be treated to improve your chances of getting pregnant and carrying a baby to term when you’re ready.

Doctors can also look at your egg reserve and the quality of eggs you have left. That’s important, Nichelle says, because if you find out you’re headed for early menopause, you can make the decision to undergo egg retrieval.

Unfortunately, your doctor might try to push back if you ask for this assessment. But stand your ground. “We can’t wait until there’s a problem,” Nichelle says. We monitor other aspects of our health, like blood pressure, she points out. Fertility should be no different. “A lot of these issues are preventable. We’re just finding out too late.”

Learn From Your Family

The #StartAsking movement doesn’t stop at the doctor’s office, though. You can learn a lot about your own fertility by talking to your mom, your grandmother and your aunts about their experiences. Did they have trouble conceiving?

“If you don’t know that your mom or your grandmother had issues, then why would you be concerned?” she says. “Sometimes these secrets are hidden in families, and you just don’t hear about it.”

This is one of the reasons it’s important to her to be a visible advocate for other women who have experienced fertility problems. “I wanted to say, ‘Hey, I am a black woman, and this does exist, and I know lots of black women having issues.'”

How to Support Others With Fertility Issues

If infertility doesn’t affect you personally, it’s all but certainly an issue for someone else in your life — whether you realize what they’re going through or not.

That’s why Nichelle urges you to hold back on the “When you are having kids?” questions.

“The biggest thing is not to assume,” she says. You don’t know what’s going on behind the scenes and what painful feelings your question could stir up for someone else.

It’s also wise to avoid similar questions (like “When are you going to give Matthew a little brother or sister?”) to couples who already have one child. They might be experiencing secondary infertility.

If you know that a friend or family member is having trouble getting pregnant, resist the impulse to offer advice (“Take a vacation!” “Just stop thinking about it!”). Like Nichelle, your loved one has probably heard it all already. Instead, it’s more loving to simply be empathetic and supportive. Ask how they’re doing and give them the space to open up to you. Let them know they’re on your mind. Sometimes people experiencing infertility feel like others have forgotten their pain or are choosing to ignore it.

Situations around pregnancy and babies require extra sensitivity, Nichelle says. If you get pregnant yourself, tell your loved one privately before announcing it publically. A text message can be a kind way to handle this, Nichelle says. That gives your loved one some space to process their own emotions without feeling that they need to immediately put on a brave and happy face.

What’s Next for Nichelle?

Nichelle has already done so much to spread infertility awareness as Mrs. North Carolina, but her story just keeps unfolding in new directions. Right now, she’s working on a podcast about infertility.

And I couldn’t be more excited to tell you that Nichelle is now pregnant herself! After her third IVF transfer in December, she’s preparing the nursery for her bundle of joy. To get updates on her journey, follow Nichelle on Instagram. You can also learn more infertility and how you can raise awareness yourself at the website for National Infertility Awareness Week, which happens April 21-27.

Turn back to #MovementMakerTribe on May 20th to read about Nichelle’s Crowning Achievement.