White Saviorism is The Enemy of Racial Justice

White Saviorism is The Enemy of Racial Justice

On a recent episode of Trevor Noah’s The Daily Show, correspondents Jaboukie Young-White and Michael Acosta parodied some of the white community’s responses to Black Lives Matter. My favorite is his zen pose on a yoga mat with a whispered, histrionic “Black lives matter.” As the clip suggests, a good deal of what we’re seeing on social media is white saviorism masquerading as ally-ship. White saviorism is one of the primary ways White people (often unwittingly) contribute to systemic racism. 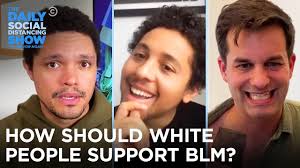 Let me preface this by saying that I don’t want to cast aspersion upon or question all the well-meaning and sincere White allies out there. The national conversation taking place right now is unprecedented and important. It has to continue. However, we can’t show up only when it’s trendy, or to make us feel better and less guilty about our own positions of power and privilege.

Here’s an example of White savior behavior: a friend of mine who is Black said many White friends reached out to her asking how she was doing in the aftermath of George Floyd’s murder. Some of these people hadn’t reached out to her in months. This begs the question: did those friends reach out because of genuine concern or because it made them feel better to do so? My friend was already mentally and emotionally exhausted and was now in the uncomfortable position of needing to make her White friends feel better and less guilty by letting them know how she was doing.

A former colleague, meanwhile, received $15 from a White friend, with the message “Happy Juneteenth. Lunch is on me today.” Apparently, there was a movement to CashApp Black friends to show solidarity. But here’s the thing: you can’t Venmo your guilt away. And, also, that’s just offensive, so please, keep your $15 or make a donation to the NAACP Legal Defense Fund instead.

White saviorism is anchored in the false belief that people of color need White people to save them. According to this belief, White people help people of color in order to assuage their own guilt and make themselves feel better about their privilege and position of power. The belief is rife in our culture. Think of the many Hollywood films featuring white characters who rescue black people: Gangster’s Paradise, Remember the Titans, The Blind Side, Freedom Writers, and The Help, to name just a few. The White character is glorified for taking a Black kid under his or her wing, helping bring about justice for a Black friend, or saving a Black person from violence or poverty.

Consider mission trips and other volunteer trips. How often have we seen pictures of celebrities, White missionaries and other volunteers posing with orphans or with people in malnutrition clinics or refugee camps? Who do those images serve? Certainly not the orphans, the hungry, or the asylum seekers. Instead, they serve only to reinforce the divide between the first and third world and to further “other” the non-white.

I once saw a group of missionaries in the Port-au-Prince airport wearing t-shirts that read, “If you don’t cry while you’re in Haiti, you don’t have a soul.” Consider how this denies Haitians their basic dignity. What does that t-shirt say other than that Haitians live such poor, destitute lives that one can only pity them? This negates the historical and cultural richness of the country. It undermines Haitian pride. Perhaps worst of all, it represents ignorance and historical amnesia.

Haiti is what it is today because colonial powers and other slaveholding nations feared the precedent set by Haiti’s Independence in 1804, when slaves waged the first successful slave uprising in the world by defeating Napoleon’s army. Haiti was forced to pay reparations to former French slaveowners to the tune of what amounts to $21 billion today. The United States, where the institution of slavery was alive and well, refused to acknowledge Haiti as a country for sixty years, fearing the precedent set by the slave uprising. The U.S. subsequently occupied Haiti from 1915-1935 and precipitated further economic decline through its trade policies. Haiti was crippled before it even had a chance to walk. 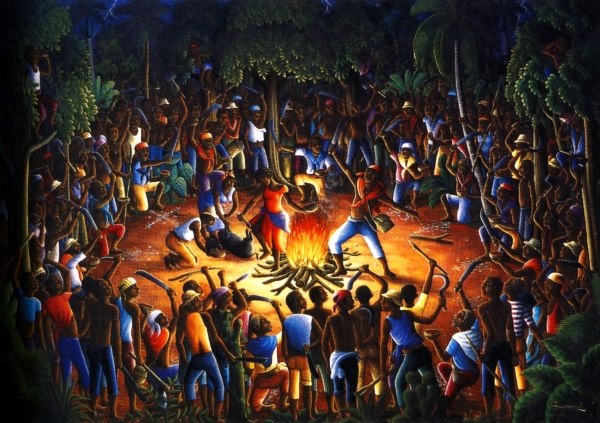 Cérémonie du Bois Caiman, Andre Normal (1990), which is said to have sparked the Haitian Revolution.

Today, poverty and disaster tourism abound in the developing world. Many of these disasters are made and/or exacerbated by first-world powers and global inequities. To feel like we are doing good in the world, we travel to these places, put up with a lack of electricity or running water for a few days and then return to our clean water and air-conditioned homes. But first, we have to snap a few pictures.

Now let’s take that a step further and consider the parallels poverty/disaster tourism and stereotypes of Black people in America as broke, lazy, angry, irresponsible, etc. Just as disaster tourism and the media fail to capture the richness and diversity of Haiti and other countries like it, so too, do we fail to capture the richness, beauty, and diversity of Black bodies, Black experience, and Black lives. 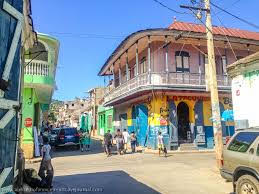 Why is it that some of us are more comfortable traveling thousands of miles to volunteer in developing countries than we are doing the hard work in our own backyard? Because it’s easier and it makes us feel better than turning our gaze inward, training it on ourselves, on the ugly truths that underlie racism in America. As Austin Channing Brown writes in her book I’m Still Here: Black Dignity in a World Made for Whiteness, “Our only chance of dismantling racial injustice is being more curious about its origins than we are worried about our comfort.”

I have the good fortune to work for a company that takes social justice seriously. Over the past few weeks, Micron has lifted up the voices of black team members, giving them a forum to share their stories, and investing significant resources into helping combat social injustice and make our workplace more diverse and inclusive. Today, we had a fireside chat called “Breaking Down Racism and Injustice.” One of the presenters, Baffour Kyerematen (@BaffKyerematen on Twitter), said, “show up when it matters, and not just when it’s visible.” To me, this gets at the central tension between white saviorism and true ally-ship. White saviors show up when the occasion is visible. A true ally is there when it matters. And where it matters most is offline in our schools, boardrooms, neighborhoods, hospitals, workplaces, and churches.

Here are a few ways we can be allies when it matters:

-Help make sure our places of work, worship, and community are truly diverse – not just sprinkled with a few highly visible people of color (tokenism) but truly diverse in a way that isn’t about checking boxes. Tokenism is just another way to jealously guard privilege and maintain the status quo.

-Help ensure there is diversity among people who make decisions, whether that is in government, schools, etc. Only then will we see a true diversity of ideas and more inclusive spaces.

-Speak up when you hear racist comments or see racist behavior – whether it’s a macro- or a micro- aggression.

-Relentlessly attack your own unconscious bias by surrounding yourself with people, media, news, conversations, and works of art that are diverse. This will help us all get past our preconceived notions of what it means to be Black, Hispanic, gay, disabled, Asian, female, etc. and instead see others in their true depth and fullness.

-Use your vote and your voice. Write to your representatives. Call them. Bug them until they listen. Vote bigots and white supremacists out of office, but also vote out people who have a record of undermining diversity, equity, and inclusion. There are plenty of those folks out there.