When Greg Jackson testified about gun violence before the Congressional Oversight and Reform Committee in the wake of the Uvalde, Texas mass shooting, he wasn’t only speaking as a passionate and deeply knowledgeable advocate. He was also speaking as a survivor of gun violence himself. 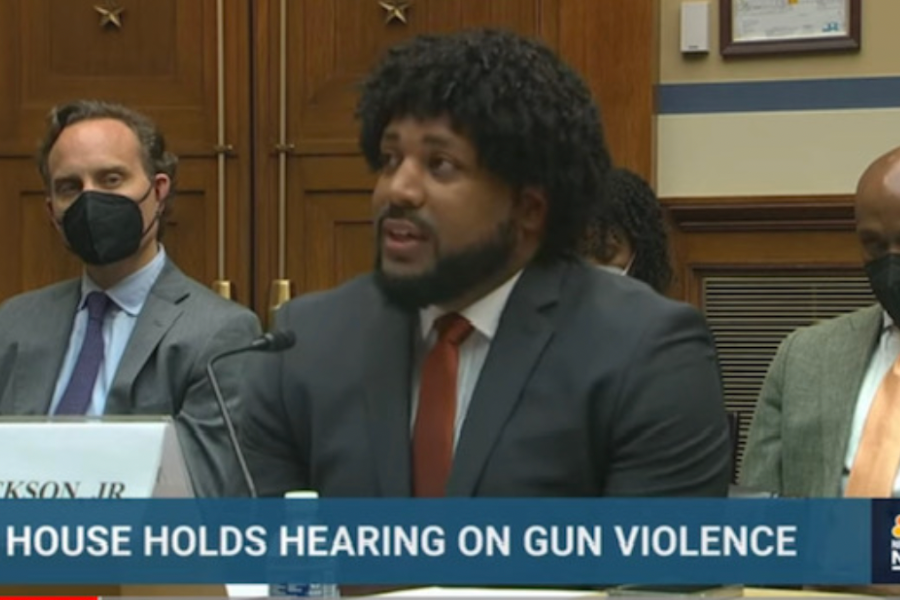 Greg was already working on gun violence prevention when he was shot as a bystander in 2013. His background also includes stints with the DCCC and in building community safety in Washington, D.C. Today he is executive director of Community Justice Action Fund. CJAF takes on gun violence by viewing it as a public health issue and empowering communities of color that are most affected by gun violence — but often overlooked in public debate — to drive solutions.

Testifying before Congress was definitely intimidating, but Greg knew it was important work. “I was the only voice brought there to speak to the interpersonal and community violence that happens in Black and brown communities every day,” he says.

Greg’s willingness to make his voice heard is driving real change. When the framework of a bipartisan gun violence prevention package was released, Greg got a call from Sen. Chris Murphy, D-Conn., about “how they added in strategies that we had been fighting for and we talked about in that hearing because we were fighting so hard, because of our presence.”

With gun violence on all of our minds right now, Greg and CJAF can help us broaden our understanding of the issue and strategies for change. So I was honored that this #Firestarter could join me for an interview. Here are some excerpts from our conversation (edited for length and clarity), plus a game plan for how you can join CJAF’s vital movement.

Could you share your personal story of surviving gun violence and how that affected your advocacy?

I actually was working with Organizing for Action as their gun violence prevention issue coordinator and southern regional director. I was shot a few weeks after taking on that position, April of 2013.

This was four days after the Senate failed to pass the background checks bill that was presented before them. And that was a huge push coming out of the Sandy Hook shooting. I didn’t know a lot about that policy specifically, but watching them make excuses on why they couldn’t take action after children had been killed while I was literally in the hospital really hit home.

I spent about six months in therapy and bedridden just recovering. And I spend a lot of that time learning more about the issue. Why was this crisis so rampant in Black and brown communities, and what have we missed? And watched every documentary I could find, read every book I could read because I just had nothing but time.

What surprised you about what you learned during your recovery?

What surprised me the most was how many people were profiting off of the crisis of gun violence. I mean, we knew it was a terrible thing. But as I researched and learned more about it, I noticed that through the private prison system, there was so much money to be had in mass incarceration. And the gun manufacturers were literally marketing violence to profit off of fear and to profit off of specific insecurities. I just was just in awe at what lengths these entities would go to market violence.

People’s focus is on mass shootings right now, but what’s the full picture on gun violence — especially in communities of color?

Less than 2% of gun-related deaths are connected to quote-unquote mass shootings. But they dominate media, and they also dominate the policy responses. When we think about what it takes to prevent a school shooting, it’s very different from what it takes to prevent a shooting from domestic violence or from an interpersonal conflict or even a mass shooting in a neighborhood. The huge emphasis on mass shootings has honed in on some of the more polarizing policy changes. For a long time, it’s kind of controlled the debate around what needs to be done and what could be done, and, frankly, really pushed the debate toward hardware reforms and regulations. 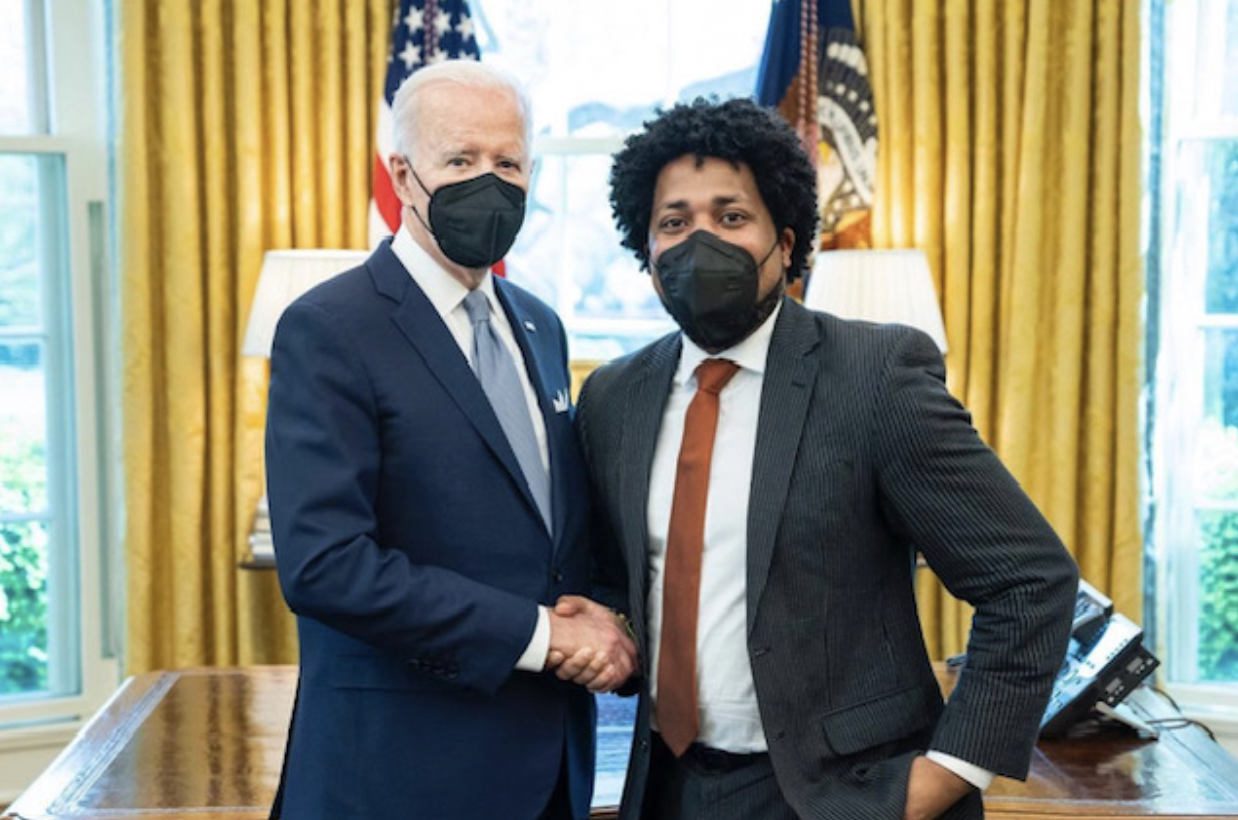 What does it mean to view gun violence as a public health issue?

One of the biggest mistakes of our country has been to only attack gun violence as a crime problem when, in fact, when you look at numbers of lives lost and even the complex ways that people are being impacted by violence, it’s very clearly a health crisis. Any other cause of death that is that intense has received a strong public health response, starting with research and then digging in with, yes, policies and regulations, but also resources and public health solutions that are fully funded and evidence based. And we haven’t seen that with gun violence.

In fact, of the top 30 causes of death, this is the least-researched one. A lot of that is because of the gun lobbies’ obstruction of research, obstruction of strategies to reduce violence. What we strongly believe can work, and we’ve actually seen in multiple cities, is that these public health strategies and evidence-based community strategies have tremendous impacts on reducing the number of violent deaths. But they have been overlooked and underfunded and under-resourced even in progressive cities — because it’s being drowned out by this crime-first approach that we frankly believe has been failing in cities all over the country.

How can we make progress against gun violence on the local and state levels?

The biggest indicator of whether someone will act out violently is being personally exposed to violence. The solution to that really is just pouring into the people who have already been traumatized and helping them navigate through that trauma in a healthy, productive way and helping them heal and grow. That drastically will reduce violence in itself. That’s something that a big bill out of Congress can’t do. But a city office of health, a department of health, a school system that invests in grief counselors or therapeutic services — that’s where a lot of that real healing work can happen. Where cities have invested in those strategies and invested in victim services, survivor support services, we’re starting to see tremendous changes.

At the local level, a lot of the innovative solutions are born, because that’s where communities are at town halls and meetings and saying what they need and exposing what challenges and hurdles they’re facing. Gun violence in Black communities especially is very different neighborhood to neighborhood. And we really have to be sensitive and in tune with what communities need if we really want to solve this crisis. That starts from talking to the people directly impacted in those communities.

How can readers of this article become more effective advocates against gun violence?

The No. 1 thing that they can be fighting for is resources for violence prevention strategies in their city and also advocating for an all-of-government approach to addressing violence. It can’t just be law enforcement. The Department of Housing should be playing a role. Your employment services division, your hospital system, your school system — all of them should be working together to support those who are most at risk, those who have been exposed in those neighborhoods and communities, or just those families or individuals who have been most impacted. It should be an all-of-government approach to help them navigate through that impact, but also into a healthier lifestyle. Because it’s one thing to intervene in a conflict, but it’s another thing to change the culture or address the risk factors that led to that moment. I think if we did those two things very, very well, the actual access to guns would be way less critical to reducing gun violence.

What are you most proud of in your work to reduce gun violence?

All the people that I’ve been able to help find a voice in this movement and have helped empower to be stronger advocates. When I was shot, there wasn’t a lot of room for people who were victims of inner city or interpersonal violence. If you weren’t a mass shooting survivor, you weren’t even invited to events or you were in the back of the room. And that’s traumatizing in its own way to think that your pain and trauma are less important. Similar to me, there are a lot of folks who just felt left out of the fight who had been traumatized and impacted, but had a lot of talent to bring to the table. Along the way, our organization has really empowered a lot of new voices and new leaders to be strong advocates, but also to start to bring new policy solutions to the table.

How You Can Join the Movement

Huge thanks to Greg for sharing his incredible story. If you’re feeling fired up, donate to Community Justice Action Fund or become an advocate yourself. CJAF makes it easy to take action by phone or online, and, in some states, you can even join coalitions of community leaders who are fighting for change. Check out cjactionfund.org for more info on current efforts.