How can we ensure that policing better serves all communities? How can we curb the officer-involved fatalities that are the sixth-leading cause of death among men 25-29?

In the U.S., these questions can be divisive. Pew Research Center recently found big differences in how black respondents and white respondents to a survey rated their local police departments on using force appropriately, treating everyone equally and holding officers accountable for misconduct.

Here in my home base of Austin, Texas, we have an amazingly innovative #MovementMaker on these issues: Meme Styles. Meme is tapping the power of data and technology to change the whole conversation around community policing. Her work creates empowerment, cohesion and understanding. So I was thrilled to talk with Meme and learn more about her movement.

‘A Family of #Firestarters’

If anyone was ever born to make a difference, it’s Meme. “I come from a family of #MovementMakers,” she says.

Her grandfather was an organizer in California in the ’60s and ’70s. “He just had this passion and this energy to change the world and leave a lasting impact,” she says.

Mirroring the path his granddaughter would take, one of his many projects was serving as commissioner for work between the black community and the police department.

One of her uncles was active in the Black Panthers. Her father did a lot of community organizing, and her mom was “an activist in church” and a role model to other women, Meme says.

Meme’s own activism started early. “My dad always encouraged me not to conform and to think outside the box,” she says. In fourth grade, she led her first “movement”: a petition to get chocolate milk in her school. “My reasoning was ‘Why should all milk be white?'” she says with a laugh.

Growing up in Oceanside, California, she was often the only black girl in class. In high school, she started the Black Student Union. “I always wanted to create this community of color around me,” she says. “And so I figured the best way to do that was to organize and to bring people together.”

‘Let’s Take a Look at the Data’ 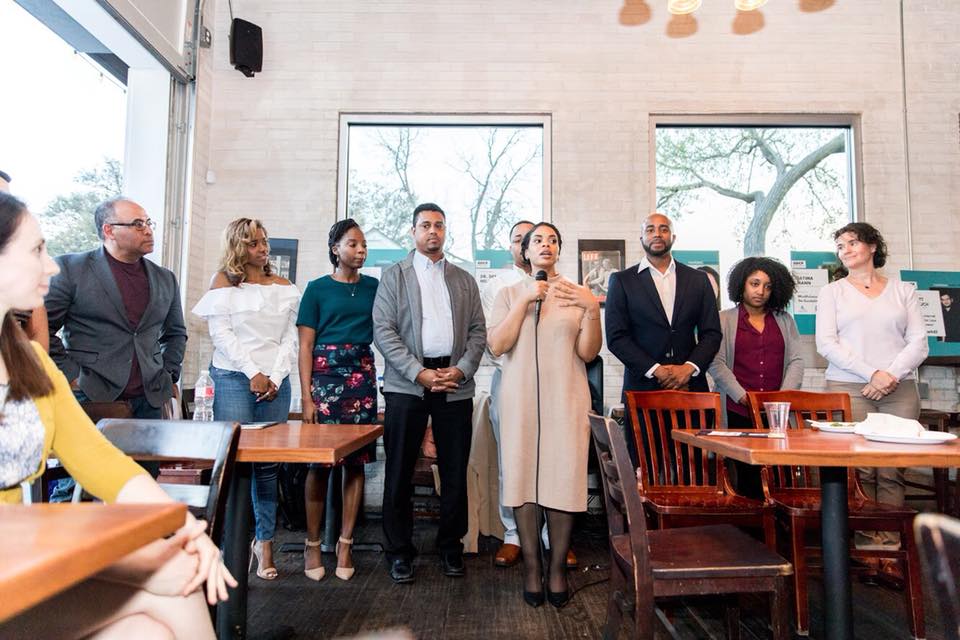 MeMe is a known storyteller

That’s been a theme throughout her life. Today one of the ways that Meme mobilizes others for change is through MEASURE Austin. The spark for MEASURE came when Meme was part of a panel on community policing back in 2015. The panel included Austin officials like the mayor and police chief, as well as community leaders like the local NAACP president.

“And then there was me,” she says. Meme sensed she was there to act as “the angry black activist.” But she decided not to play that role.

Instead, she said something that would start her movement: “Let’s take a look at the data.”

She pointed out that any discussion of community policing should involve topics like budget, metrics and evaluation. Her approach got buy-in from the rest of the participants.

“I was then encouraged after that panel by the mayor to go back and think of a solution,” she says. “So my solution was MEASURE Austin.”

MEASURE brought together police and community members to discuss how to measure improvements in community policing. One metric that came out of the collaboration was that police officers should receive implicit bias training. As a result, the Austin Police Department now makes this training mandatory.

From criminal justice, MEASURE has expanded its focus to also include health justice, education justice and economic justice. It creates a conversation around data-driven activism and data-driven social in Austin.

“It’s providing the numbers — the truth — to the community so that they can then make decisions about better solutions,” Meme says. “And so that they can propose recommendations to change their own statistics and to be part of the process.”

One of the latest projects MEASURE has under way is training more black and brown activists at Huston-Tillotson University in Austin. This year, MEASURE also completed its CARE Model (Community, Advocacy, Resilience, Evidence). Created with input from hundreds of community members, CARE is a “community collaborative blueprint” to mobilize people, Meme says. It’s now being tested with two CARE teams, who will identify a problem and then apply the CARE Model to it. Meme’s goal is that CARE will be widely used as a tool for mobilizing action.

Additionally, MEASURE offers free training for police through Big Data & Community Policing Workshops held nationally. A conference on these topics is also in the works.

You can support all of this work by donating to MEASURE. This is a pivotal time, since the grant that MEASURE has been operating on will end in December. “So after December, MEASURE could look completely different if we don’t get the support we need,” Meme says.

If you’re in Austin, you can support MEASURE by attending all-hands meetings the second Wednesday of every month at Huston-Tillotson. And no matter where you are, you can upload data on social justice and activism to MEASURE’s website so that your research can benefit other organizers.

“A lot of times we continue to go down the same path just because we don’t have any roadmap,” Meme says. “So we’re creating a data-driven roadmap and ecosystem.” For example, if you want to organize a march, you can visit the MEASURE website to discover data-backed best practices. 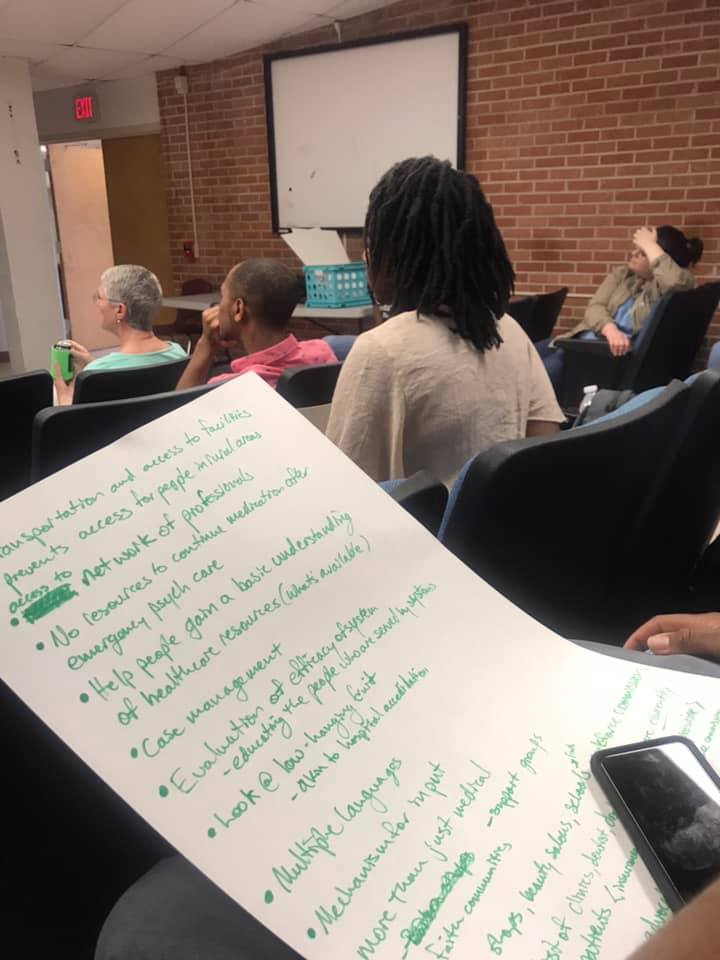 Besides MEASURE, Meme is also working to improve police and community relations through EarlyAware, a tech solution that lets first responders know about people with special needs that might affect how they communicate with them during an emergency.

This project has a deeply personal inspiration. Meme’s three brothers have mental health issues, and she was concerned about how police and other first responders would interact with them.

EarlyAware gives first responders valuable information that helps them better understand someone’s behavior and how to engage with them. Here’s how it works: An individual registers the information they want to share (for example, that they are hard of hearing or that they have autism) in the EarlyAware system.

That’s important, Meme says, because “we expect our cops to do way more than they should be doing.”

EarlyAware can also help individuals even if authorities in their area don’t subscribe to the service’s database. If you or someone you care about has an issue that could impact communication, you can post a sticker from EarlyAware in your home or vehicle. It reads: “Emergency responders: An occupant may have one or more conditions that impede communication. Communicate with awareness & care.” When you request a sticker, EarlyAware notifies your local authorities about your needs.

EarlyAware officially launched on September 6 with a morning press conference, followed by a community conversation at Google.

Meme’s Advice for the #MovementMakerTribe

No matter what form your activism takes, Meme has an important reminder for you: Take care of yourself. Giving so much to her social justice work while still holding down a full-time job took its toll on her, and she suffered a heart attack a few years ago.

Now that she’s recovered, she’s vigilant about eating well, exercising, spending time with loved ones and just vegging out sometimes. She also left her full-time job to focus on MEASURE and Early Aware. So remember your self-care, #MovementMakers. We need you!

Want to follow Meme’s lead by using data in your own movement? Her advice is to first do research on the area you want to create change around. Who else is working that area? “Attach the data to what they’re doing,” Meme says. “Be that voice for the data. And if it’s then really needed for you to create your own space, then go for it.”

You don’t need an advanced degree in data science to become a data activist. But you do have to understand “the value of data as a tool for truth-telling and storytelling,” Meme says. “People can be fed the numbers all day long and still believe what they believe they believe because there’s no story behind it.”

Tell me what you think about MeMe’s movement to turn community policing into one of innovation and inspiration. Reply to the posting of this article on Facebook and tag someone who should read it. Thank you, #Firestarter!

PS. This is the first in a three part series about those who are changing the game in community policing. Learn more about Kassy Alia Ray and Tarik Daniels in our next two blog articles. Each are leaders who truly turned moments into movements!